Top 10 Places to Visit in Cyprus

There are so many wonderful places to see in Cyprus - we have chosen ten of our favourites to share with you.

The harbour at Paphos attracts visitors all year round, who take the opportunity to walk along the quay and maybe visit one of the fish restaurants, tavernas or cafes. The view is superb, with lots of colourful fishing boats bobbing in the harbour. The castle is, in fact, all that remains of a much earlier castle dating from 1391, which was demolished by the Venetians. The Ottomans used it as dungeons and the British as a warehouse for salt! It can be reached via a small bridge over a moat and is worth a visit for the view from the top. Opening hours - winter daily 9am to 5pm - summer daily 9am to 6pm - tel 26932841 (Paphos Tourism Office).

The harbour is also a good place to take a boat tour of the surrounding beaches and coastline.

Ancient Curium and the castle at Kolossi are both in the Limassol area and can be visited together in a day. They are just two examples of the wealth of history to be found in Cyprus - the Curium sites dating from the second century AD and Kolossi from the thirteenth century.

The ruins at Curium are to be found in breathtaking scenery overlooking the sea - this is probably the most spectacular archaeological site in Cyprus. There are actually two sites, the old city of Kolossi and the sanctuary of Apollo Hylates - they are a few kilometres apart. There is also a museum in the nearby village of Episkopi. As it is one of Cyprus' most popular tourist attractions, it's worth arriving early in high season.

Kolossi castle was the commanderie of the Knights Hospitallers - the name later given to the Commanderia dessert wine. Despite changing owners a number of times, the castle is inextricably linked with both the Hospitallers and winemaking.

Both Curium and Kolossi are signposted from the Limassol-Paphos highway. Curium is close to Episkopi village, Kolossi to the village of the same name.

For those of you arriving at Larnaca airport, one of Cyprus' most impressive places to visit is right under your noses! As you turn left out of the airport you will find the road running along a causeway. On either side you will either see two lakes or two salt flats, depending on the time of year - this is the Larnaca Salt Lake and site of the mosque or Tekke of Hala Sultan. Salt has been extracted from the lake since ancient times and this continues, on a small scale, to this day. If you are visiting Cyprus in late winter or early spring, look out for the visiting flamingos and other migratory birds. Another salt lake can be found further along the coast of Akrotiri.

If you like entertainment of the non-stop variety, then Ayia Napa should be top of your list. It was once a small fishing village, but not anymore. It boasts some of the best beaches on the island, lots of opportunities for watersports and is a popular destination for package tours. Arrive on a summer's morning and you will find a quiet, almost eerie place - but only because most of the visitors are sleeping off the excesses of the night before! This is Cyprus, however, and in the midst of all the fun and noise in the very heart of the town, you can find peace and tranquillity in the monastery with its fountain, flowers and quiet cloisters.

The nearby resort of Protaras is said to be more family orientated and like Ayia Napa, has good beaches and lots of watersports. South of Protaras is Cape Greko, the easternmost point of this end of the island.

5. Nicosia 'within the walls' and the House of Hadigeorgakis Kornesios

Look at any map of Nicosia and you will see the distinctive shape of the walls of the old city. The walls and their eleven bastions were built by the Venetians in the 1570's - most of the historic monuments of Nicosia can be found in the winding streets within the walls. It is also the site of the famous tourist quarter, Laiki Yitoniak, which is full of gift shops and restaurants. The best way to see what is on offer is on foot - for a bird's eye view of the city old and new go to the Ledra Museum and Observatory on the eleventh floor of the Shakolas Tower (next door to Woolworths on the corner of Ledra Street and Arsinois Street).

One of the most beautiful buildings in the old city is the house of Hadigeorgakis Kornesios - also known as the House of the Dragoman - built in the fifteenth century. It is a wonderful example of a combination of Venetian and Ottoman building styles. The position of dragoman was a powerful one - he served as translator to the Turkish governor and liaised between the Ottoman authorities and the Orthodox Christians. He was an immensely powerful man and, as was common for such people in those days, was beheaded in 1808. The house can be found at 20 Patriarchou Grigoriou near the Omeriye mosque.

A must for nature lovers, Cedar Valley in Tilliryan Troodos is aptly named. However, the cedars in this secluded valley are no ordinary trees, but the indigenous Cyprus cedar, Cedrus brevifolia, a close relative of the famous cedars of Lebanon. There are thousands of them in Cedar Valley. It's not the easiest of places to find, but for that reason, you are almost guaranteed peace and quiet when you get there. It can be reached via a winding unpaved road from Pano Panagia on the Paphos side of the mountains, or from the Kykkos side along a signposted (unpaved) road along the route from Kykkos to Stavros tis Psokas.

And if you are really lucky, it won't be only cedars you see. Cedar Valley is in the heart of the habitat of the moufflon, a species of wild sheep native to Cyprus, and the national symbol. They are very shy animals - those who want a guaranteed viewing will need to go to the enclosure at Stavros tis Psokas.

It is almost impossible to pick just one of the painted churches of the Troodos - they are all little gems of craftsmanship set in breathtaking scenery. Panayia tou Araka - the church of Our Lady of the Pea - is a superb example and one of ten painted churches on the UNESCO World Heritage Site list. It is to be found on a terrace near the village of Lagoudera, surrounded by trees and wild peas from which it takes its name, with a superb view down the valley. The church itself is tiny, and is dwarfed by its snow-proof roof and the wooden trellis that surrounds it. However, when you walk inside, the vibrant colours and the number of the frescoes take your breath away. They date from the twelfth century and are brilliantly clear, having been cleaned relatively recently.

If the church is locked the caretaker priest lives in the adjacent house - admission to the church is free but donations are welcomed. As in all churches in Cyprus, visitors should be modestly dressed and photography is not allowed.

To go right back to Cyprus' earliest history, you need to visit the remains of stone-age settlements at Choirokitia, better preserved than most other Neolithic sites in the eastern Mediterranean. The settlement dates back to the sixth or seventh centuries BC - although the site was discovered in 1936, serious excavation did not get underway until the 1970's. It is perhaps one of the earliest human settlements on the island and is a UNESCO World Heritage site. The people of Choirokitia lived in beehive-shaped one-storey houses - more than sixty such houses can be seen at the site, as well as the original streets and lanes and a larger chieftain's mansion.

This site can be found approximately half way between Larnaca and Limassol, signposted off the highway. Opening hours winter daily 9am to 5pm, summer 9am to 7.30 Monday to Friday, 9am to 5pm Saturday and Sunday - tel: 24322710

To those in the know, Lefkara means only one thing, lacemaking. The exquisite Lefkara lace is one of Cyprus' most famous exports - Leonardo da Vinci is said to have bought some to take back to Italy. As you wander around the streets, you will be invited into the many shops to see and buy the local lace. Lefkara is, in fact, two villages, Pano (upper) and Kato (lower) Lefkara. Pano Lefkara is the home of the Museum of Traditional Embroidery and Silver-smithing in the house of Patsalos - ideal for the visitor who wants to know more before they buy. Opening house 9.30am to 4pm Monday to Thursday, 10am to 4pm Friday & Saturday, closed Sunday - tel: 24342326

Last but by no means least, the colourful and intricate Roman mosaics to be found in Paphos are a must for all visitors to Cyprus. They were discovered by accident in the 1960's - further excavation revealed a number of Roman houses all with spectacular mosaics, depicting scenes from ancient mythology.

The mosaics give a clue to the wealthy and opulent lives of some of the Roman Paphiots. The main sites are the House of Dionysos, the House of Aion and the House of Theseus. The mosaics can be found near the lighthouse and fortress of Saranda Kolones situated in close proximity to Paphos Harbour. Opening hours October to March daily 8am to 5pm - April/May and September 8am to 6pm. June to August 8am to 7pm - tel:26306217

Of course, if after all that you still have time and energy, there's always the Akamas peninsula, the Archbishop in Nicosia, Panagia Chrysoirroyiatissa monastery, Petra too Romiou, Aguios Lazaros in Larnaca ….. And so the list goes on. 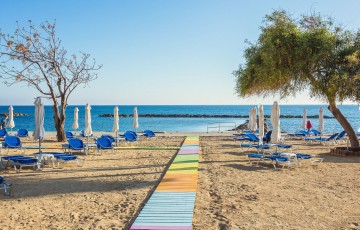 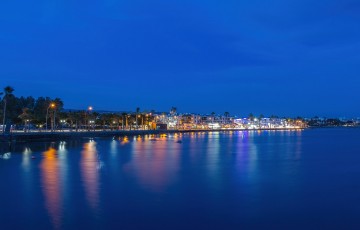 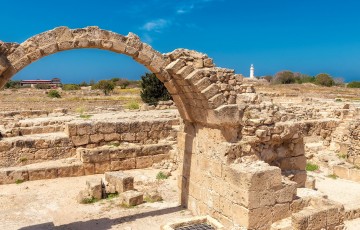 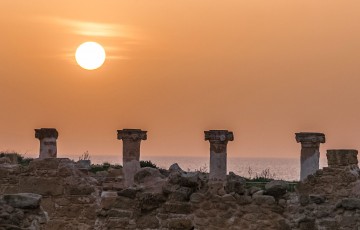 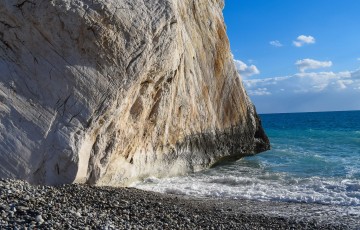 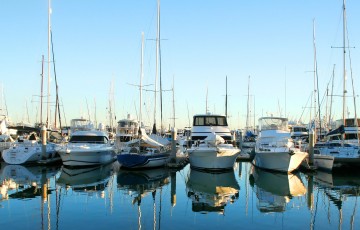 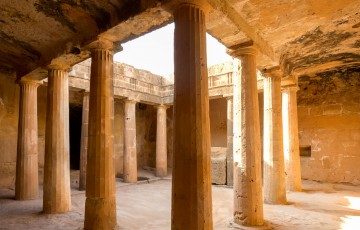 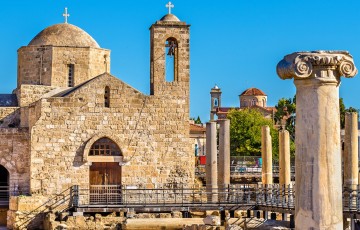 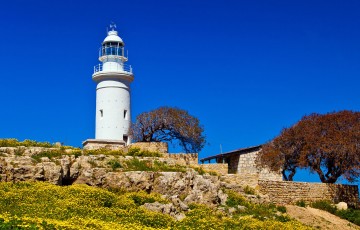 Driving in Cyprus Driving in Cyprus The best way to travel around Cyprus is by car. It is possible to rent a modern car through The Villa Group, before your departure. Vehicles are available with both manual and automatic transmissions. As for roads, they are generally well paved and modern, exc... TRAVEL 2 years ago

Hunting in Cyprus Hunting was and still is very much part of the culture of Cyprus people, ask any Cypriot and there is sure to be a hunter somewhere within the family. Figures do fluctuate from year to year but there are around 45,000 officially licensed hunters in Cyprus.The Cyprus Government la... TRAVEL 3 years ago

Cyprus: The Cruise Centre Of The Eastern Mediterranean Before the armies of Alexander the Great made their famous thrusts east toward lands unconquered, their ships called into port at Cyprus to be readied and refitted. The same strategic location, at the crossroads of three continents, Europe, Asia and Africa, that made Cyprus a cr... TRAVEL 4 years ago
© Copyright 2021 | The Villa Group Ltd | Company Reg. No.: HE329539 | VAT Reg. No.: CY10329539Z